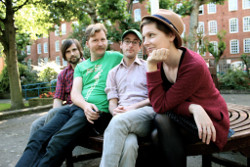 Allo Darlin’ were formed after Australian Elizabeth Morris arrived in London and bought a ukulele from the Duke of Uke shop in Shoreditch.

She began writing music and was soon joined by fellow Australian Bill Botting (bass), Paul Rains (guitar), and Michael Collins (drums). Their debut album attracted many plaudits including being named No. 2 record of the year by online retailer eMusic, and a glowing 1,200 word essay by Robert Forster of The Go-Betweens in the Australian critical magazine, The Monthly.

Their second album ‘Europe’ scored 8.1 on Pitchfork, was made USA Today’s Album Of The Week, and garnered praise from Uncut, Q, NME, The Quietus and The Guardian. It was also named Rough Trade Shop’s Album Of The Month, where it went on to become the biggest selling album of the year.

The band have been playlisted at BBC 6Music and have recorded sessions for Lauren Laverne, Marc Riley and John Kennedy (XFM), as well being Steve Lamacq’s personal pick for BBC Introducing. Their releases to date, along with their joyous and effervescent live shows, have seen them build an intensely loyal and ever-increasing fanbase.

“Classic indie pop… doesn’t rewrite the formula for wistful bedsit charm as much as show that it can still be carried out masterfully.”
Pitchfork

“A masterclass of modern cult pop.”
The Guardian